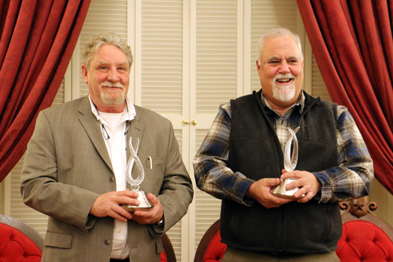 Sculptors Jerry Williams and Chris Miller received the Governor's Award for Excellence in the Arts in 2018.

Each year the Arts Council recognizes outstanding individual and organizational contributions to the arts in Vermont with a variety of awards. Nominations for the awards are accepted in the spring and reviewed by an outside panel. These are presented at public ceremonies and provide an opportunity for the recipient to be honored by colleagues, friends, family, and members of the communities where they live and work.

Governor's Award for Excellence in the Arts

The award is given to a person (or persons) of distinction in the arts as evidenced by one or more of the criteria for the Governor's Award for Excellence in the Arts.

Walter Cerf Medal for Outstanding Achievement in the Arts

The Walter Cerf Medal is presented to individuals who have made a sustained contribution to the arts and had an impact on Vermont's cultural life. The award is named in honor of the late philanthropist Walter Cerf whose generous gifts, exceeding $5 million, have benefited numerous Vermont institutions including the Arts Council. Mr. Cerf was instrumental in establishing the Arts Endowment at the Vermont Community Foundation, and his contributions have created a $1 million fund to assist Vermont's artists and arts organizations.

Selected by the Council, the medals may be awarded to artists of renown or to those in a closely related field, such as philanthropy, administration, production, education, advocacy, or mentoring, according to the criteria for the Cerf Medal.

This award is presented to individuals who have made a sustained contribution to learning in and through the arts and/or had a positive impact on the quality of education in Vermont. The award is named in honor of Ellen McCulloch-Lovell, former Executive Director of the Vermont Arts Council and President of Marlboro College. Recognition may be for work done on the local, statewide or national level, and is expected to focus on, but not be limited to activities related to pre-K through 12 education.

Selected by the Council, the award may be given to arts educators, professional teaching artists, teachers, or administrators and others whose work has substantially improved student engagement in and knowledge of the arts, according to the criteria for the Ellen McCulloch-Lovell Award.

This award is presented to an individual who has an established and well-deserved reputation in Vermont as an advocate for the arts and their impact on Vermont. The award is named in honor of former Council chair and artist Peggy Kannenstine whose spirited work on behalf of the arts has benefited numerous Vermont institutions including the Arts Council. Recognition may be for work done at the local, state, or national level.

Selected by the Council, the award may be given to Vermonters committed to furthering the arts in fields such as accessibility, administration, education, mentoring, philanthropy, production, wellness, and others according to the award criteria for the Kannenstine Award for Arts Advocacy.

The award is named after the Council’s founding executive director. In addition to his critical work at the Arts Council, Williams’ long career included public school teaching, serving in the Vermont Legislature and chairing the effort to restore the Vermont State House. The award is given to those who mirror his selfless public service and devotion to artistic excellence as one vital ingredient in a robust community as well as his desire to see the arts thrive.

Selected by the staff of the Vermont Arts Council, this award is given to a person or organization for meritorious service to the arts in Vermont, according to the following criteria for the Arthur Williams Award.

Recommendations are welcome throughout the year. To be considered for the 2022 awards, candidate names must have been submitted by June 1, 2022. Nominate a Vermont artist or cultural organization by:

Occasionally, people or companies worthy of recognition by the Council do not fit comfortably into one of these categories. Parties interested in nominating such an individual or business should still use the form and make the case for recognition.